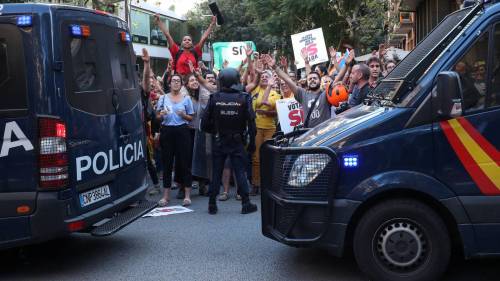 The Catalan government is attacking the democratic legality, and Spain is defending it.

Miguel Aguilar explained recently a common misunderstanding of the Catalan question. On the one hand, he argued, there is the matter of funding and the place of Catalonia in Spain. On the other, the illegal undertaking upon which the Catalan government has embarked.

That illegality is what has spurred the courts to act. The timing or the performance of the current government over the years can be debated, but it does not seem that the government’s mistake has been excess or overreaction. The best way to retain authority is not to impose it, and it is a tribute to our enlightened societies that we mistrust coercion from the State. But the State must protect the rights of citizens and uphold democratic legality, with prudence, firmness and the most scrupulous respect for the law.

The illegal endeavour, which is not limited to the suspended referendum, is a postmodern coup. Rebranded with a patina somewhere between kitsch and cool, a national-populist movement has emerged, and has skillfully used certain concepts. Among them are “the right to decide” as a euphemism for self-determination, the confusion between voting and democracy, the prestige of the rebellion against the establishment (as in Brexit, those who orchestrate the rebellion against the establishment belong to the establishment, but that does not seem to matter), the strange idea that a democracy becomes an autocracy when your side does not win. And, as Fernando Vallespín wrote, the promise of independence allowed that everybody projected their own particular utopia, selecting the part of reality they disliked more, and advancing the cause most dear to them.

So for some, it was a protest against austerity policies, even though the promoters of the secession were among the first to implement austerity policies. It was a left-wing movement, even though it assumed the form of an alliance between the right, the communists, and an assembly-based political formation, and even though it was a movement against redistribution, where the rich tried to liberate themselves from the poor. It was a way towards further integration within Europe, even though the UE had said that a hypothetical independent Catalonia would be outside the Union. It was a protest against corruption, though nationalism in Catalonia had created corrupt cronyism. It was the only way to escape from Spain’s impossibility to reform itself, although Catalan forces had been co-responsible. It was as a civil rights movement, although the only right that was claimed was the right to deprive others of their citizenship. It was an exciting democratic enterprise, although the headquarters of parties opposed to independence were assaulted, although the law under which Catalonia would advance towards independance violates the separation of powers, parliamentary procedures saw the opposition crushed. It was about freedom, even though officers of the Catalan government attacked journalists, and even though pro-independence political forces have stated that those who have the wrong kind of ideas about secession should be signalled out.

There was the perception that all this was a kind of declaration of intentions, something mainly expressive. The independentists’ tactic was that this transgression would at some point become something obviously serious for the state—thus provoking a response. The response, they thought, would always appear as disproportionate: it would would allow those who had undermined the rule of law to present themselves as martyrs for democracy. (The photo of an arrest is more understandable and reproducible than something abstract like the violation of the citizens’ political rights.)

Secessionism fights against an imaginary enemy: an authoritarian, undemocratic Spain. This imaginary Spain is a country where Catalonia does not have a high level of autonomy, a Spain that is not an advanced democracy, comparable to the countries around it. In a moment that would have brought a smile to the scriptwriters of Saturday Night Live of the 70s, Gabriel Rufian, an MP, tweeted that October 1 would be the day of Franco’s death. That imaginary country is a Spain (a “Madrid”, basically Castile and some pit stop to pump gasoline and use the bathroom)—a place which is coarse and underdeveloped, but also Machiavellian and ruthless. This folk image of Spain fits in with a conception that still appears in foreign press: a picturesque idea of a ​​backward country suggesting that some editorialists and correspondents are stuck in the Hemingway era—which probably would not have happened if we Spanish had not belived and promoted this vision.

That is the image of Spain that the secessionists wanted to activate. That image is false and must be fought against. It is a framework inherited from the Spanish civil war, but the version that presents a State heir of Francoism crushing democracy does not work. In this case, and despite enormous differences, the Catalan government is the one attacking the democratic legality, and the State is defending it. In doing so, it protects the rights of the Catalans in the first place.

Like the defenders of Brexit, the promoters of secession have consistently resorted to lies and made promises they know to be false. El País debunked the false account that current Catalan President Carles Puigdemont disseminated about the Guardia Civil’s actions. His predecessor, Artur Mas boasted of a strategy that aspired to deceive the State. But that modus operandi entails misleading the Catalans who oppose independence, and also the supporters of secession. They are now deceived when people speak of an authoritarian government, of political prisoners, of a democratic movement, of the suppression of freedom of expression. It is possible that, like the best liars, some of those who propagate these falsehoods believe them to be true. Sometimes they have been able to impose their language on those who think differently: we speak of “Catalans” as if the anti-independence Catalan were not Catalan, and about “unionists” as if they were symmetrical options. The distortion of language indicates that, when it comes to finding a solution, we will not only need common sense, respect for the rule of law and minority rights, good faith and political intelligence. We will also need dictionaries that remind us what words mean.